You’ve made the decision to drive an electric vehicle (EV). Likely reasons for doing so include environmental benefits, lower operating costs, and less maintenance required. To double up on these impacts, solar comes to mind for generating the required electricity to charge the EV batteries. A one-two punch of sorts.

Hence the resulting question for those using this as a first entry point into solar. Can solar only be installed to charge an EV? For the answer, let’s take a look at the facts.

Electricity consumption for various models of EV vehicles can be found here on the fueleconomy.gov website. This kWh/ 100 miles estimate can then be combined with the annual expected miles driven and the percentage of the time the EV would be charged at home. The result will be the estimated home charging that the vehicle will need annually.

Much like annual property electricity consumption, this value would be used to properly size a solar electric system for your EV. Although the solar panels would produce this power during the daytime, then electricity would be consumed elsewhere in the home with excess to the grid.

Typically, the EV would be charged at night using the stored solar electricity bought back from the grid at roughly the same credit price, with no change in the utility bill. So, the solar panel likely would not actually charge the vehicle, but rather, offset usage elsewhere in the home.

Solar companies have a surcharge for small solar systems, such as that required to charge a single EV. Even two EVs would likely require fewer panels than the minimum to avoid an installation surcharge.

It is conceivable that an off-grid array of panels could directly power the car charger, however, the vehicle would need to receive its charge during the day, every day, with less availability in the winter and an overabundance in the summer. Likely not a practical, efficient or cost-effective solution.

And of course, if the EV was not at home during a given day or no charge was required, this dedicated solar power generated would not be used, and hence, wasted.

If we knew the EV would require charging every day, but were unsure of the time, battery storage could be used to ensure that the solar electricity generated was not wasted and available to recharge the EV at any time. However, this still is not optimal, unless multiple EVs were charged every night of a solar grid of a size where no small system surcharge is incurred.

Until the price of battery storage is more attractive, storing excess solar electricity on the grid would be the better way to go currently.

It would likely be more cost-effective to size the solar system based on the total home consumption, as long as, attractive south and west roof pitches are available. Excess solar electricity stored on the grid could be used at any time in the future giving flexibility as to the timing and amount of charge required by one or more EVs over the year. 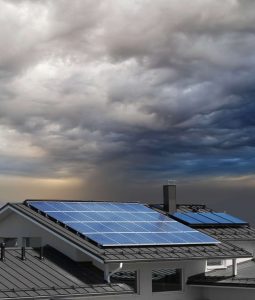 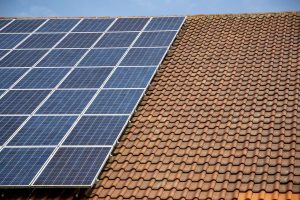